3rd May 2018 is World Press Freedom Day. A glance at the Reporters Without Borders (RSF) Index makes it clear that more ‘white spots’ on the map are desirable! 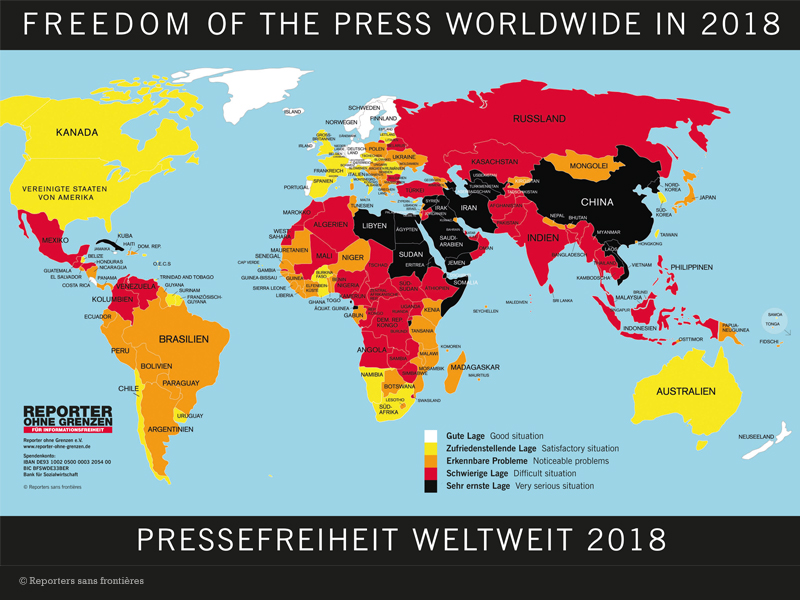 Looking at the 2018 World Press Freedom Index published by RSF last Wednesday, the colours red, black, yellow, orange stand out - white is hardly represented. In terms of press freedom, this means that there are numerous countries and territories where the situation for media representatives is above all "bad"  (red) and there are only about a dozen where it can be described as "good" (white).

The situation looks "very bad" (black), especially for journalists in North-West Africa and Asia. “Problematic” countries marked by orange are mainly in South America, Africa but also increasingly in Europe. The situation is “fairly good” (yellow) mainly in North America, Europe and on the fifth continent. A total of 180 countries were examined. In many countries, especially in Europe, the situation has worsened. Frightening? Yes! Where do the friends and enemies of press freedom sit and what exactly is the situation in Germany and the USA?

Friends and enemies of press freedom

Norway (1) and Sweden (2) continue to lead the ranking of press freedom, followed by the Netherlands (3) which has improved by three places and where Cryptshare is fast becoming the market leader. These countries therefore offer particularly good conditions for the media landscape and thus for democracy.

Uprisings, wars and repressive behaviour of totalitarian states are continuously disrupting the functioning of the media landscape in many countries of the world. As in the previous year, China (176), Syria (177), Turkmenistan (178), Eritrea (179) and North Korea (180) come last on the list.

But nowhere else in the world has the situation of freedom of the press deteriorated as much as in Europe. In the EU member states of Malta (65, previously ranked 47!), the Czech Republic (34) and Slovakia (27) and in the Balkan country of Serbia (76), journalists are publicly criticised and insulted, and legal action is taken against them.

Journalists have a professional and ethical responsibility to keep their sources secret. According to RSF, this is becoming increasingly difficult for investigative journalists in the USA and other Western countries. The legal prosecution of them and their informants had already reached alarming levels in 2016.

They are detained on arrival, their electronic devices confiscated and searched.  Unwanted reporting is loudly discredited by official bodies as fake news and the ‘truth’ is claimed by themselves without the benefit of editorial validation. A supposedly free country like the USA has dropped two places in the ranking for the second year in a row and is now in 45th place.

Violations and insufficient protection of informants in Germany

The number of assaults, threats and intimidations against journalists in Germany is still high. Journalists are repeatedly targeted by secret services and law enforcement agencies. The state is trying to hack encrypted communications. This endangers above all the confidential exchange of sensitive news between investigative journalists and their informants. The BND Act, which came into force in 2017, makes it possible to monitor the communication of journalists outside Europe. At the moment, a constitutional complaint has been lodged by RSF and other organisations. Germany has improved by one place and now ranks 15th on the list of press freedom in 2018.

Insults, threats, surveillance - again and again media representatives worldwide are under massive pressure due to their work. To protect themselves and their informants, journalists and bloggers use encrypted communication. Confidential data, even when transmitted via the Internet, remains secret until their investigation is completed, and all evidence is secured. With the help of software and technology like Cryptshare, journalists retain control over explosive news and can control publication content and protect their sources.

Media representatives who need to conduct investigative research and communicate securely can purchase Cryptshare at a significant discount within our pro-bono programme. To find out more send us a request – if you wish encrypted via our web application!

Ranking of Freedom of the Press 2018 - excerpt: